My buddy Bob informs me, that tomorrow at 7:00 am,

there is a safari leaving. This is a once in a lifetime chance to

go on an actual African safari. So I could go out the night before, and party with

the guys, drinking and carousing, chasing women, in a shallow display

of man at his worst, or I could  stay in, and partake the next morning in

an experience shared by the likes of Livingston and Stanley. It was really

no decision at all.

So here is a picture of the safari, taken by my buddy Bob.

I don’t have any pictures of my night of drinking and carousing.

What can I say?

Up Close and Personal

Everywhere we went, there were snake charmers. In this photo, a young kid, probably 17, was playing  a hand made flute to charm a cobra. He let me hold the snake to take some pictures, next,  I will post the picture with the story of what happened then.

The Bar Across the Way 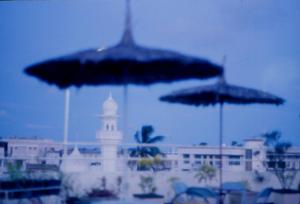 In the “Doorway Into The Past” post, you can just see the black table-umbrellas of a roof top bar in the background.  Here is the view from that bar.

Doorway Into The Past 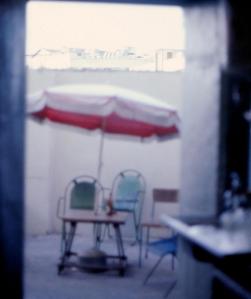 It was February, 1976, and I was on shore leave with a couple of Navy buds in this small “off the beaten path” bar in Mombasa, Kenya in Africa drinking Tusker Lager beer. I looked over at the side door, and saw these two chairs under an umbrella with a bottle of Tusker Lager on the table. In the background, past the wall, on top of a building across the way, I could see the black table-umbrellas of another establishment. It was one of those settings that had nothing of particular noteworthiness from a tourists perspective,  but something about it seemed interesting, as if I was looking into a doorway viewing a scene that had been viewed by many travelers over the years, never changing. I wondered how many sailors from around the world had sat on the same patio drinking and reminiscing about what sailors all talk about, women and home. I snapped the picture almost as an afterthought. As I was drinking my beer, I peeled the label off the bottle for no reason in particular, and then put it in my shirt pocket. When I got back to the ship, I put the label in my locker. For whatever reason, that label somehow survived all my travels and moves for the next 30 years.  As I was going through some old tubs of “stuff” I came across the label, and I remembered the bar in Kenya. I went through my old slides, and sure enough, there it was, the picture through the doorway. It will probably never win a Pulitzer prize, and may solicit a few “humph, I wonder what he was taking a picture of..” comments,. But for me, I wonder if someone is sitting in the bar, drinking a Tusker Lager, and looking at the doorway into the past.